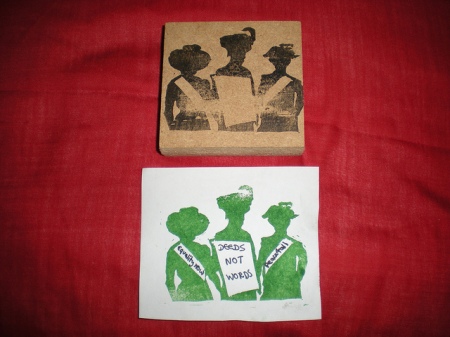 In the aftermath of the Miley Cyrus scandal in late August of this year, I noticed a piece on Jezebel titled “Solidarity is for Miley Cyrus: The Racial Implications of her VMA Performance.” It was the first article I’d read–of what turned out to be many–arguing that Cyrus’s use of black women “as props” was more problematic than any of the sexual gestures and irresponsibility she was generally being called to task for.

While the overarching sentiment of the article has since been widely echoed across the Internet, what stuck with me the most was the term “#solidarityisforwhitewomen” (which was appropriated and changed for the title of the Jezebel piece). I dug around, followed links and fell down an Internet wormhole reading about the creation and implications of the term. Mikki Kendall, a black female blogger, created this Twitter hashtag.

In her piece explaining the creation of the hashtag, Kendall argues that:

Feminism as a global movement meant to unite all women has global responsibilities, and – as illustrated by hundreds of tweets – has failed at one of the most basic: it has not been welcoming to all women, or even their communities.

She begins to unpack the racial history of feminism (and its lack of focus on women of color), but only emphasizes recent history. Her specific call to prominent “Internet feminists,” most of who are white women, magnifies a somewhat myopic viewpoint and undermines the historical importance of her hashtag.

In the early days of feminism, at the beginning of the 19th century, the feminist movement focused solely on the education of middle-class women (Estelle B. Freedman, No Turning Back: The History of Feminism and The Future of Women). During this time, however, slavery was still a very real institution in the United States. So, as a result, the middle-class elite (read: white women) were arguing for education for women but ignoring a very large segment of the community they were supposedly fighting for. Even during the abolitionist movement, there were anti-slavery groups that were comprised solely of white women, underscoring this implied notion that black women weren’t needed to join the feminist movement; they were still in their own, lesser class. As Jezebel’s Lindy West put it, “A lot of the first-wavers were totally racist, plus they were still pretty into the idea that a woman’s job is shutting up and scrubbing stuff. But, you know, nobody’s perfect.”

Maybe Kendall is right in focusing her complaints only on the recent past. Perhaps it makes more sense to speak to today’s generation of feminists using relevant examples that they can relate to. But the larger issue is this: the lack of intersectionality amongst feminist communities isn’t self-sustaining. Women of color have historically been marginalized within feminist movements, causing infighting and an astounding lack of solidarity. If white feminists can’t recognize this inequality amongst their own ranks, any step forward is going to continually be met by racial barriers. Miley Cyrus may be the latest culprit of undermining women of color in a quest to assert her own femininity, but she won’t be the last. If we can’t (or won’t) talk about race at the same time we argue for equality for all, we aren’t really talking about equality. Ignoring this fact will lead to the self-cannibalization of the feminist movement that Kendall pointed out (and also helped to sustain).

©All rights reserved by SalleObscure

During a segment called “Kids Table”, Jimmy Kimmel, the popular comedian and late-night host of “Jimmy Kimmel Live!” asked three kids how the U.S. should handle its $1.3 trillion debt to China. One kid suggested, “Kill everyone in China!” Instead of pointing out that is not a good idea, Kimmel responded, “That’s an interesting idea!” Kimmel later asked these kids whether they should allow Chinese people to live. ABC didn’t censor or cut “Kill Everyone in China” to avoid controversy, but put this remark on air on Oct. 16. Kimmel’s response and ABC’s practice upset many Chinese and sparked protests in mutiple cities. Jimmy Kimmel never expected to become famous overnight in the Chinese community in this way. Kimmel’s controversial response to “Kill Everyone In China” has led to an angry uproar among Chinese Americans.

I interact with the Google Autocomplete several times a day and I rarely consider the mechanics behind it. My blog here is showing you how search engines such as Google Search play down minority’s voice and amplify majority’s voice by filtering and suggesting certain information.

Google US and Google HK/Screenshot on Dec. 5

The Autocomplete function of Google Search predicts and completes the search phrase by offering multiple query phrases as we start typing in the first words of our search into the search box. According to the autocomplete FAQ page, the search queries that we see as part of Autocomplete are a reflection of the search activity of users and the content of web pages indexed by Google. That is to say, the result of the Autocomplete is based on certain phrases’ frequent usage in searches and web pages.

People with cultural capital are able to play down minority’s voice to their advantage. According to Google Manage Online Reputation, the Google Search is able to manage online reputation by removing unwanted content and the associated search result. I speculate how much effort the Public Relation team of ABC has put in removing the relation between “Jimmy Kimmel” and “Chinese” so that we won’t think about Jimmy Kimmel’s racial comments and Chinese people’s protests. We are gradually letting technology such as the Autocomplete finish our thought processes for us..

Search Engines such as Google Search don’t just play a role in filtering certain information but also suggesting certain information. Recently, The United Nations Entity for Gender Equality and the Empowerment of Women (UN Women) used the Google Search Autocomplete function in an ad campaign to highlight discrimination against women. The campaign placed autocomplete results over Women’s mouths. By searching “Women shouldn’t…” and “Women should…” we can get autocompleted sentences such as “Women shouldn’t have rights” and “Women should stay at home”. This campaign reveals widespread gender prejudices. This campaign made me wonder whether there is also discrimination against race.

The result is quite shocking. I am stunned by how negative these autocompleted phrases are. This autocompleted information can mislead some people and have a negative influence on society. Since the Autocomplete completes the phrase, it potentially has a negative influence on how people think about other races. For example, people might associate Asians with the phrase “Asians should go back to Asia” even though they might never have thought of that before. Since the Autocomplete is based on web popularity, it reveals deep-seated prejudices. In the search bar, people can ask any question or express their opinions that they won’t express in public. To some degree, the Autocomplete reflects what we’re thinking as a society and reflects what the majority thinks. Minority’s voice and their struggles are ignored.

While many of us interact with Google’s autocomplete feature several times a day, we rarely consider the mechanics behind it. We see Internet as an equitable space where every race’s voice can be heard. However, search engines such as the Google Search are playing down minority’s voice or and amplifying majority’s voice for us but we never think about that. Some people argue we are past race and we are in a post-racial society, but there is still a far way to go to work on racial equality not only offline but also online. 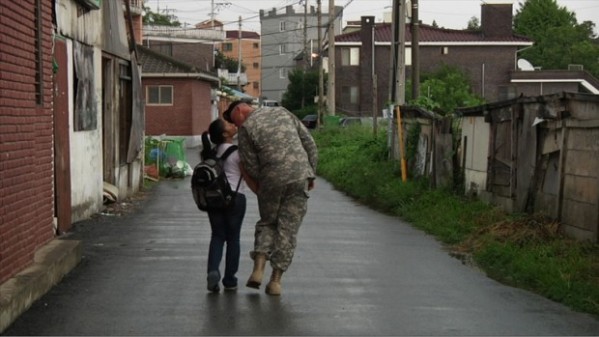 Still from The Woman, The Orphan and The Tiger

The fifth in our series of interviews with artists from the War Baby/Love Child: Mixed Race Asian American Art, currently on display at the Wing Luke Museum. Click below the picture to hear the short podcast with Jane Jin Kaisen.

Photo by: The Come Up Show

Ben Haggerty (Macklemore) is famous for his album The Heist (produced by Ryan Lewis), which was on the Billboard charts and ranked first on iTunes back in 2012. The Seattle rapper is often praised for advocating equality and expressing his opinions on sensitive issues regarding minorities. Aside from his music supporting LGBT rights called “Same Love”, he opened up to discuss about his racial identity and the effects it had on his career during an interview with Rolling Stone.

As a White man in hip-hop, he admitted that he has benefited from “white privilege”, and would not have been as successful he were Black. He talked about how he was able to receive attention from the media and how his music like “Thrift Shop” could have a wide range of audiences because of his race. “And even though I’m cussing my ass off in the song, the fact that I’m a white guy, parents feel safe. They let their six-year-olds listen to it” (Rolling Stone, 2013).